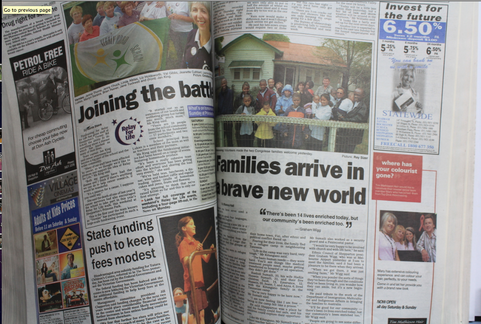 Shepparton News - 21 October 2005
In the 1980s and 1990s, most African refugees were resettled to start their new life in Melbourne's metropolitan area. Due to a competitive labour market there, many Africans from a refugee background found this situation very difficult, as they also had difficulties coping with other issues such as education, health, language and housing. Only skilled migrants have the chance to fit in, as they have qualifications and a high level of English. They have another significant advantage of the Commonwealth educative system, which is similar to the one they had in their countries of origin. Once in Australia, skilled migrants find opportunities to be employed easier than those of refugee background. Some of them are medical doctors, nurses and pharmacists – the example of diversity of employees at Chemist Warehouse and GV Health in Shepparton.

In 2003, both the Commonwealth and some state governments became aware of the potential of regional settlement. They found the settlement needs of humanitarian entrants to boost population growth and address the labour market shortage in regional centres. We should understand Australian policies regarding humanitarian entries are not new, but a continuity of measures to support other existing ones on immigration issues. The vision behind this is controlling its borders. The quest is to select those to come to the country.  In 1945-50s, similar situations happened with considerable political and economic interests. Whilst the  ‘White Australia Policy' still dominated that era, they planned to bring in Australia refugees and other victims of crimes of World War Two. According to Andrew Markus, "In the first half of 1947 Calwell had become increasingly aware of the 'splendid human material' to be found in the refugee camp and of the presence of Europeans". Considering Calwell's ideas in the 50s, as the Minister of immigration, his actions undertaken during post- World War II had demonstrated how Australia government has long and strong immigration experiences in term of challenges and opportunities.  The government usually focuses on policies to regulate entry by foreigners. This does not mean that they succeed everything. Even in 2001, prior to the elections, the Prime Minister, John Howard said, “we will decide who come to this country and the circumstance in which they come”

Despite the White Australia Policy, the government had faced in the past challenges and political resistances that pushed to change these white measures.  Different polices such as 'Assimilation' as well as 'Multicultural society' had been put in process.  This is how Australia started opening its doors to different nationalities as its policies changed over time. From an acceptance of European refugees to Africans is indeed a tremendous shift in Australian history. Since the Second World War, Australia has resettled approximately “…650, 000 of those migrants arrived under humanitarian programs as displaced people and later refugees as well as asylum seekers…” Even though the clashes existed in the 70s and 80s between new arrival; Italians, Greeks and receiving society, the only thing we may know is that Australia is a ‘fair go’ country: social justice, privilege, proud and thankful to be here. Australian government continually helped and settled refugees. It is the case of Afghani and Iraqi in the 2001s and 2003s.

Regarding what was planned to Shepparton, in 2004, in order to facilitate the preparation of the arrival of refugees, a steering Committee was established. This was to work with the Department of Immigration and Citizenship, DIAC Victoria to assist the settlement of these new arrivals of refugee families. The program was called ‘Shepparton Regional Humanitarian Settlement Pilot.’ In their discussions, they decided ten families from the Democratic Republic of Congo would settle in the region.

The first two families arrived in Shepparton from Tanzania camp. ‘There’s been 14 lives enriched today, but our community’s been enriched too.’’ – Shepparton News 2005. As Australia has the third largest dedicated humanitarian resettlement program in the world, in the same way, Shepparton has become the first regional area in Australia to settle refugees directly from overseas. This new program launched on November 17, 2005 by the Minister for Citizenship and multicultural Affairs, the Hon John Cobb MP. This is how the Congolese community history started in Shepparton.  Some months later, the government increased the number of migrants and humanitarians entrants. All refugee families arrived since 2005 have been welcomed into their new and receiving community, which demonstrated a positive attitude, exceptional generosity and provided basic needs. Everything was well planned and managed by the Steering Committee and stakeholders involved for the success of the pilot program. The glimmer of hope from the success of pilot program have been seen due to technical and integration methods employed to Congolese people, directly mixed with the mainstream population. Shepparton community already consists of people from a range of cultural background.  Congolese children were enrolled in schools and become confident, as they found themselves in a situation of being accepted in a multicultural society. These schools are St Mel’s Primary School, St Brendan’s Primary School, Shepparton Christian Community School and Notre Dame College.

As well, churches played a significant role that facilitated Congolese to integrate into the wider community; this was remarkable, as all Congolese who arrived in Shepparton were Christians. Their Christian faith and involvement into church services was beneficial. Some Congolese established good relationship with parishioners so they provided them with opportunities to know the place. They facilitated them to find out about social activities, outings and visiting different areas in the Goulburn Valley. Many Congolese adults were assisted by church people with their driving skills and even linked them with orchardist for employment opportunities. These are St Brendan’s Parish, St Mel’s Parish, St Paul Lutheran church, Shepparton Uniting Church, and Shepparton Assemblies of God.

It is indeed important to signal about Sudanese community, who are Africans as well as Congolese, but they were not involved in the pilot program. They individually moved to Shepparton when they heard about how warmly Congolese were welcomed in the Goulburn Valley. They settled in Shepparton for economic and social reasons. Find work and school for their children. ‘The Department of Immigration and citizenship (DIAC.2007, p.4) has reported that since 1996-97 about 20.000 people born in Sudan have settled in Australia and Sudan was the leading source of Humanitarian entrants since 2003-4.’ The main destination is Victoria (36%) where they faced critical settlement situation because of numerous issues, lack of strong and formed support services. Sudanese had experienced racial and political instability in their country of origin, lack of language acquisition; they found difficult to adjust to the new culture and integrate into the wider community and services. According to Ndungi, Sudanese faced also racism and discrimination in Melbourne.

Meanwhile local churches assisted the integration of Congolese in Shepparton, AMES, AMEP, IHSS and Volunteers participated and contributed in working with Congolese. Despite various challenges faced by Congolese in this process, local actions by local people supported DIAC's pilot program of refugee settlement in Shepparton.
What happened? Social confidence had motivated Congolese to a collective sense of belonging,  formation of the Goulburn Valley Congolese Association Incorporation in 2006.  Being in a nostalgic situation, having souvenir and home memories had motivated Congolese searching to understand  how to deal with what is around them. Halbwachs said, ‘all memory is structured by group identities.’  Without giving up, some Congolese continued learning English at TAFE, those who had completed English as a Second Language enrolled in specific courses of their choice and others found employment.  Being confident and eager to help the needs of participation and contribution to share Congolese culture and tradition with the broader community.  This led members of their community to form different groups: Angel Voices Band in 2006, Congolese Traditional Dance Group of Shepparton in 2009, Young Ugees 2010. All these groups represent  diversity and uniqueness of Congolese culture. Sport and educative activities, including Kialla United Football Club, Kiswahili School was launched in 2008 and French School in 2011. Both schools function under the Victoria Schools of Language at Shepparton High School.

I believe all the support the Congolese got to settle, a peaceful place and being in touch or familiar with local people; this created in them a sense of belonging, of feeling included. The place has been crucial in forming an identity.   Some Congolese worked on farms, others were learning English at TAFE and everyone was provided with full social assistance by government through Centrelink; they felt confident to progressively begin their own activities. Those who had completed English as a Second Language, started studying another course of their choice at TAFE.