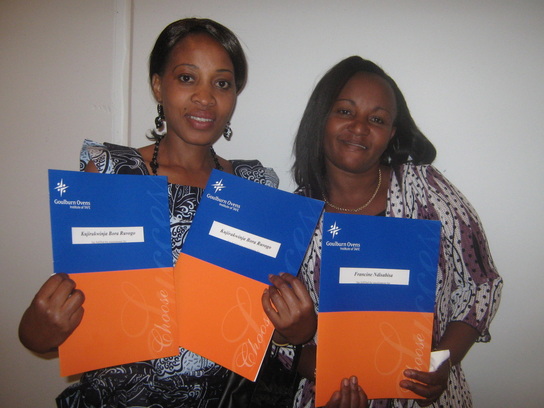 Bora Ruvogo and Francine Ndisa are happy to complete their courses at TAFE
Starting a new life since 2005, everything from zero is the experience Congolese faced to understand a new culture, place and people, even a new bureaucratic system. Despite assistance received through the government, the broader community, churches and service providers, there is still a long way to go for Congolese. To entirely meet the needs and concerns of these new Australians was difficult. At a certain level, individuals and families have different cases. Past experience related to education as well as the refugee life in the camp. It is at this point that the settlement of African from refugee background looks similar and its success depends on attitudes and positive behaviour of the receiving society.  William Abur argued about the settlement challenge face by South Sudan Refugee Community in Melbourne, the lack of orientation and support services, reinforced by the fact that social support can influence immigrant and refugees’ feeling of belonging or isolation. Once refugees or any type of immigrants are facing social issues in their host country, the consequence is always disastrous. The integration in the wider community would be disrupted, showing an image of an exclusive society rather than an inclusive one. Refugees to make their own history is going to be hard, as there values are not recognized, their expectations diminished; conflicts may occur. Without addressing these social issues or making available suitable services where to access information, the results could only be catastrophic. Even in Shepparton, Congolese are facing challenge such as: learning a new language and communicating effectively with the wider community, availability of cultural products and services, for example hairdressers, grocers and a multicultural centre. Learning a new culture and understanding what it means to be an Australian can be disrupted if you are not guided to know values and norms of your new world, yours to be recognized and vice versa.

Understanding that Australia is a very accepting and fair country for the majority, there are still small minorities of people who may be racist or bully refugees. Sometimes, refugees are portrayed negatively in media. For instance, Liza McKenzie addressed this in ‘Debunking the Myths’ appeared in Shepparton News in November 2011.

It is important for new Australians to understand this is not acceptable behaviour for the majority, but they must have the skill set to deal with the minority and potentially negative situation in a positive way. This means, to ensure the refugee community is always portrayed in a positive by being role models to the wider community. We will ensure a successful, long term and prosperous into Australian society. For example, the Italians and Greeks faced similar challenges in the 1960s -70s. However, over time they became accepted as mainstream Australians due to their land work, good family ethics and good food!

Elsewhere, learning and participating in new sports, skill levels are different compared to someone who has played their whole life. Aussie Rules is an example of this - missing opportunities in major leagues like AFL only due to lack of skill not lack of athletic ability. But when refugees are called to integrate in the mainstream society, there are at the same time rejected. This is the case of Majak Daw, a Sudanese AFL player, who several times faced racism. Ndungi asserted, ‘Literature indicates that racism has a significant impact on health due to stress and has both physiological and social consequences’. This is a strong recommendation for Australia. If the host country knew this and they deliberately discriminate just because of the color of their skin, it is a crime. All Refugees are enlightened by hope when they resettled and are always excited once opportunities are given to them. Make sure doors are open for young refugees to participate at an elite level and represent Australia on a world stage because they will have the same opportunity

Did people know that African refugees, once arrived in Australia, they are exposed to different illness and disease and immunizations requirement?  How it looks when someone starts a new life, new country and new germs?  Also, the integration of children into education system joins to new games and in a different environment. ‘Whilst some refugees had past suffering includes traumatic life experience in conflict zone and refugee camp, displacement and separation of family members,’ regrettably, some services are still ignoring to assess refugees, which results in mental health issues without consistence mentoring follow up, exposure to violence. Their employment opportunities would be unlikely achieved and they are considered as unskilled workers. Imagine they would face similar challenges to other Australians. Whilst seemed unsuccessful ones, they are now confused with these stigma and stereotypes of the ‘boat people’ who enter illegally in Australia whereas all refugees from Africa came to Australian under the Humanitarian Program and Special Humanitarian Program. How to deal with this?